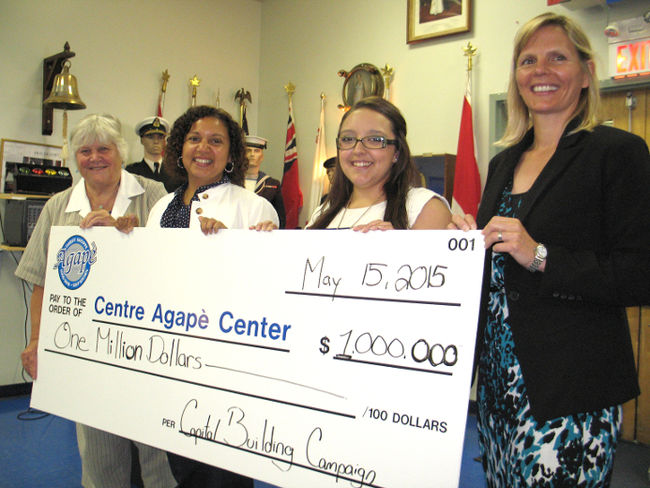 Within These Walls Building Campaign

It’ll be a new home for the Agape Centre, but the busy soup kitchen and food bank in Cornwall isn’t going anywhere.
The Centre on Thursday morning officially kicked off its “Within These Walls” building campaign, an aggressive and ambitious fundraising program to raise $1 million for much-needed renovations and repairs at the Fifth Street West site.

“The goal is $1 million, it’s a big number but the list of repairs needed is long,” said Bernadette Clément, co-chair of the building campaign, at a kick-off breakfast held at the Navy Club.

“The Agape Centre is a lot of things to a lot of people. It’s a welcoming place, an oasis, a safe haven to a lot of people in need. . .within those walls are all the services provided to people. (But) we need to fix the building if we want those services to continue to be provided.”

The Centre in a glossy magazine handed out Thursday had pictures of holes in walls and ceilings and outdated, crumbling infrastructure.

Clément noted the building’s heating system needs to be replaced, which will eat up a big chunk of the project costs, but there’s also plenty of work to be done on flooring, bathrooms and entrances – and many other areas.

The campaign is off to a great start, Clément noted, with $138,000 raised even before the official kickoff. Donations will be accepted from now until Sept. of 2017, but the major lifting in the fundraising efforts are between now and next May, because “repairs are urgently needed,” Clément said. “It’s a big campaign, but we feel confident, (and) things are moving (financially) already.” READ MORE HERE