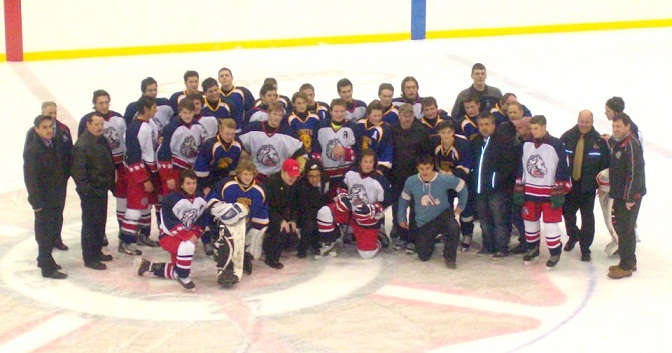 The Major Midget Cornwall Colts were hosting the South Dundas Lions for an exhibition game to support the Agapè Centre- and what a success it was!!

A large crowd came to support the players but they also made sure to have some food items to donate and as such, 2 large bins were filled to the top which will go a long way in this time of need!!

Cornwall Head coach Raymond Landry and Coach Shawn Primeau were the leaders for this idea and on top of that, they were rewarded with a 7-3 win!!

Maxime Paquette lead the offensive charge for the Colts with a hat trick while Brock Dazé had 3 assists. Ryan Thomas scored twice while Brian Landry had 2 helpers. Other goals for Cornwall went to Alex Primeau-Wilson (Short-handed) and Colin Allaire. Kris Villeneuve managed an assist on a Power-play goal.

Samuel Dussault & Joey Lamarche shared the duties in front of the net for the Colts. But the win was really a team effort. Jeff Dobson was a rock on the blue line while Colin Mcdonald continued to be an anchor on the blue. Daniel Pilon made his physical presence known to the opposition while Kyle Howes & Mikael Dobson blocked several shots in front of the net. Kyle Quesnel was instrumental on the penalty killing unit.

The team would like to thank all that donated to the Agapè Center and supported the game!!!