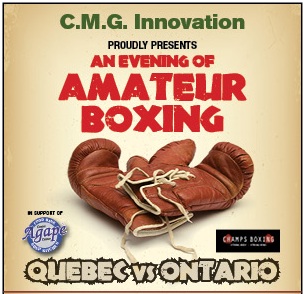 Chris Nilan, one of hockey’s most feared enforcers to speak at Agapè’s Amateur Boxing Fundraiser.

Chris Nilan, who grew up in the tough and gritty Irish enclave in Boston, was a feared enforcer for the Montreal Canadiens, Boston Bruins and New York Rangers, and a Stanley Cup champion never afraid to go into the corners or take off his gloves. This legend will be the special guest this year at  Agapè’s Charity Boxing Event June 14th.

This hard hitting fundraiser held at the NAV Centre will benefit the Agapè Centre to help knock out the effects of hunger for the families and children of Cornwall. An interesting twist, Quebec boxers will be duking it out against Ontario boxers in the ring on Saturday, June 14th.

For more information on the event benefitting families in Cornwall or tickets, please call Alyssa Blais at the Agapè Centre at 613.361.0332.

Tickets are available at SCOTIABANK, Brookdale Cornwall for $200.00 a piece and includes a full-course dinner, 6 rounds of amateur boxing, drinks and entertainment.