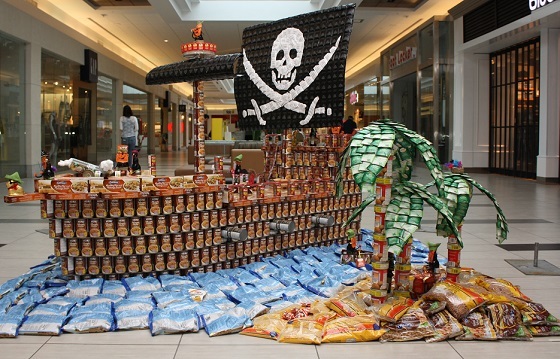 For the first time in Cornwall, teams of engineers, builders, designers, students and supporters plus more than 8,000 cans of food will converge at the Benson Centre this spring for Canstruction®.

Canstruction® is an international charity competition in which teams compete to design and build giant structures made entirely from full cans of food. At the close of the competition all of the food is donated to the Agapè Centre.

We’re really excited to bring this international event to Cornwall. It’s a fun way to raise some food for the Agapè Centre, at a time of year when typically donations run low.

And we’re eager to see the creations the teams come up with.

Teams will begin building their cansculptures on Friday, April 15th and will work through the night to have their structures – which can be as large as 10 ft x 10 ft x 10 ft – ready for judging Saturday morning.

The structures and will be on public display for two weeks, beginning 8:00 a.m. on April 16 through to April 30.

We hope everyone will visit the Benson Centre to see all the cansculptures and vote for their favorite to receive the People’s Choice Award.

“Our group’s mission is to help the community of Cornwall in any way we can. We strongly agree that hunger is a pain no one should feel,” says Thomas Devaney, St. Lawrence College student with the CCSF team (Cornwall Community Support Force), a group of five from the Police Foundations program. “We’re quite excited about this event.”

Teams contend for a title in five categories: Structural Ingenuity, Best Meal, Best Use of Labels, Jurors Favorite, and People’s Choice. The winners locally will move on to the international competition.

There is still time to register. If you can dream up a design, make a plan, fundraise cans, and assemble a group for the build, the organizing committee will make sure you have an engineer to mentor you.

Community partners include Seaway Express, Baxtrom’s Your Independent Grocer, National Grocer, and No Frills.
Canstruction® is a fun way to help our neighbors so no one goes hungry.

You CAN make a difference. One can at a time.

Canstruction® is a non-profit organization in which teams of architects, engineers, construction firms and students compete to create giant structures made entirely out of canned food. After the event all food is donated to the local food bank. Canstruction® was founded in 1992 by the Society for Design Administrators and has since raised nearly 30 million pounds of food for local communities around the world. Canstruction® is one of the largest internationally recognized food drives of its kind. For more information, visit: cornwall.canstruction.org